The award is another in a long list of accomplishments for Neil, including his Queens Service Medal in 2020 for services to hockey administration. 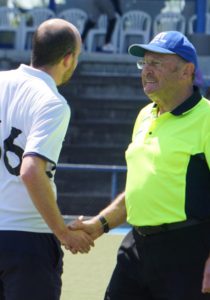 Neil say’s he is “very humbled and very honoured to receive the award. What a pleasure is is to serve”. Hockey is in Neil’s blood, with four generations of his family having been involved in the game, from his mother, to Neil, his children and now grand children, Neil continues to leave an almighty legacy and contribution to Auckland Hockey.

Having served the game over countless hours not just in 2021 but over many decades, Neil states he “obviously couldn’t do it without my wife Jacqui’s support, you can’t do these things alone. She’s been there through the dark days and the good”.

Thank you Neil for all that you do for Auckland Hockey, and your Award is wonderful recognition of the contribution you make to our game each day.

NEIL MCCORKINDALE IS HOCKEY NZ’S 2021 VOLUNTEER OF THE YEAR

Neil McCorkindale has spent his life dedicated to hockey in Auckland. In his 80’s he is a stalwart of the game, year in and year out.

2021 was a little different for Neil. Aside from his usual contribution to the game, which ranges from about 15 – 40 hours in any given week, Neil has semi-retired from commercial work. However he now dedicates his two days ‘off’ to volunteering at Auckland Hockey to help across a breadth of challenges, spending his time working through various judicial processes, umpiring, mentoring, match judge, supporting and attending club and Auckland Hockey committee meetings, judicial hearings and supporting the Intercity judicial process.

Neil has continued to be an active umpire in 2021 as well, picking up the whistle almost every day of every week until lock-down – covering College Sport midweek games, divisional men’s and women’s and any other grade that needs some help. His manner in dealing with people both on and off the turf is second to none, and diffuses many situations before they reach boiling point.

His experience across the Judicial Process has been of immense help both at AKH and Intercity level this year, with some challenging situations arising from disciplinary action against players and coaches, dealing with liquor breaches at venues across the city, maintaining behavioural standards and helping to eliminate umpire abuse from our sport. Neil puts the sport first and works to ensure the participants and their needs are met – particularly where a lengthy suspension and rehabilitation are needed.

Unfortunately over lock-down Neil had long awaited knee surgery which will now see him hang up his whistle after nearly 70 years of running up and down the turf. Neil is of huge support to AKH through his roles as Judicial Commissioner and VP, he has helped AKH work through a number of issues this year in a professional manner. His knowledge and understanding across the sport in Auckland is immense and helps AKH staff regularly deal with historic issues around the stadium, mixed with his professional engineering background Neil is a valuable sounding board for issues.

Neil also spends a huge amount of time helping AHUA and attends countless committee meetings, Presidents Meetings, Club Council and other AKH activities regularly. Neil’s family is also incredibly involved in hockey – with 3 generations spread across all facets of the sport. Neil’s passion for the game, umpiring and AKH is unmatched.

Neil has been involved in hockey most of his life starting with being in the first eleven at MRGS as a third former. His length of playing/umpiring are interlocked as a result of a condition imposed by head of Hockey at Mt Roskill Grammar.

Neil was a foundation pupil at MRGS and found himself in the first eleven at age 12, the secondary school first eleven competition was played on Saturday afternoons integrated with Auckland club hockey. A condition of being in starting eleven required you to attend Hobson park on Saturday morning and umpire junior hockey which he did between the ages of 12 to 18. He then umpired club and rep hockey up to his mid 20s. In 1976 returned to umpiring secondary school hockey and Auckland club hockey until today – a period of 43 years .

As a player he says he had a not so colourful career but he has a special claim to fame was when the Indian wanderers hockey team played at Eden Park in the 1960s in front of 30,000 people a record crowd. He was selected to play in the warm up game the day before and was to mark an Indian player, the legendary Babu Singh, who was more interested in mentoring him on the rules than beating him.

Click here to read Hockey NZ’s article on the award and Neil’s nomination.