AKH wishes Katie Glynn well as she heads to the UK this week and the start of a new coaching adventure with England Hockey. From all of us here Katie, go well, stay safe and stay in touch. 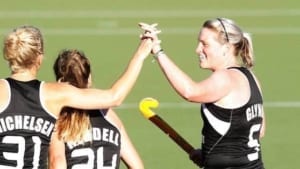 as both a coach and player. On the pitch, she amassed 134 caps and 77 goals for New Zealand, representing the Black Sticks at the 2012 Olympics, two World Cups and two Commonwealth Games. She was the nation’s all-time leading goalscorer when forced to retire at the age of just 26 and was named in New Zealand’s 2017 New Year’s Honours list for services to hockey.

Katie soon embarked on a burgeoning coaching career, firstly with her nation’s Under 18s, then leading their Under 21s before assisting the senior women’s team since early 2019. In her new role, Katie will bring her considerable attacking nous to the Great Britain and England women’s programme. With a number of talented young forwards in the programme, Katie’s arrival will give them a further opportunity to progress their skills at the top end of the pitch.

Katie commented: “I am extremely excited to be appointed. The role is an amazing opportunity for me to work with world class athletes and staff that have been successful on the world stage. I have enjoyed coaching against the squad and have always admired the way they play the game. It is a great privilege to join the group and I am really looking forward to adding what I can to continue to progress the squad.”

Women’s Head Coach Mark Hager said: “I’m delighted to have Katie on board, and she will bring the attacking flavour that we’re looking for. Over the last 18 months with New Zealand she has shown an ability to help develop quality goal scorers and to create and maximise attacking opportunities. I’m looking forward to working alongside her as a coach for the first time, I’ve admired what she’s done as a coach at both youth and senior level. Her personality will allow her to develop strong relationships, while challenging all to aspire to the high levels required at international level, and I know the staff and players are looking forward to working with her on the journey ahead.”