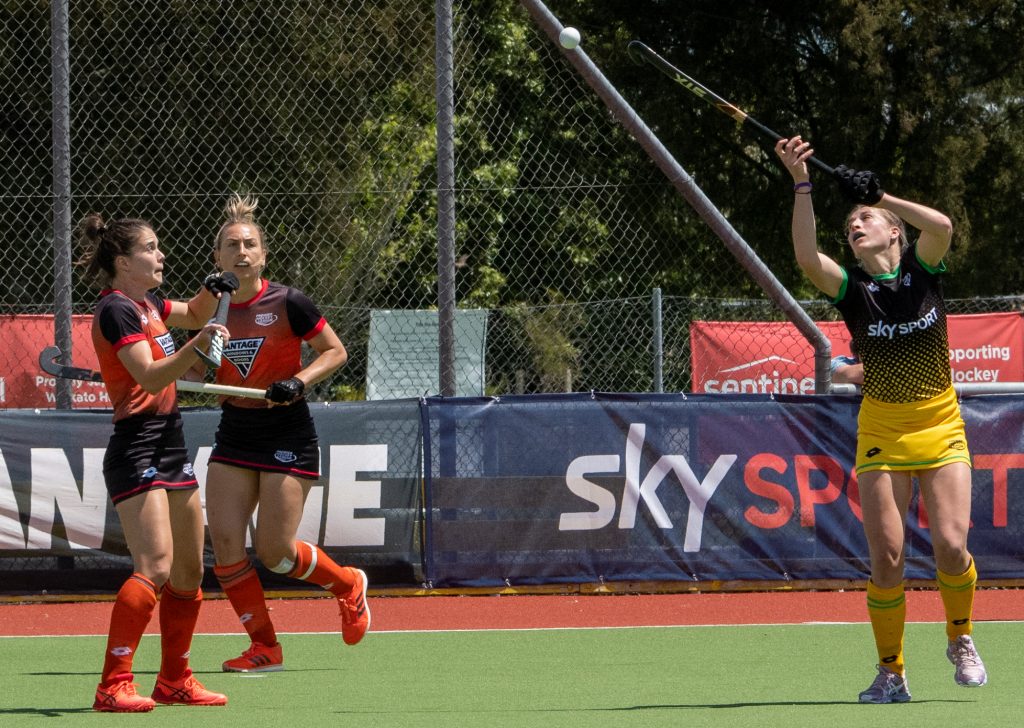 The Northern Tridents have extended their lead at the top of the Sentinel Homes Premier Hockey League with a commanding 4-1 win over the Southern Alpiners. The match was closer than the score reflected as for the first half the game was hanging in the balance.

The Northern Tridents entered their match against the Southern Alpiners full of confidence following wins against the Hauraki Mavericks and Central Falcons. The match opened with end to end hockey as both teams would go close on several occasions. In the end it was the Alpiners who would strike first through Olivia Merry with a deft touch off a crash ball into the circle that made its way past goalkeeper Brooke Roberts.

The Tridents found themselves trailing entering the second quarter for the first time in the Premier Hockey League. They rebounded outstandingly when a crash ball of their own from Steph Dickins which hit the post, Kate Ivory grabbed the rebound and smashed it between goalkeeper Kirsty Nations legs. Only moments before the halftime break the Northern Tridents would hit the lead when the ball rebounded off the Alpiners goalkeeper, and a heads up play by Tridents striker Kirsten Pearce would see her touch the ball over the goalline.

They were buoyed by taking the lead just before the halftime break, the Tridents further cemented their hold on the match early in the second half when a tremendous bouncing ball into the circle found Kirsten Pearce. She would then chip the ball over the goalkeeper’s shoulder for her second goal of the match.

The Southern Alpiners entered the final quarter in desperate need of goals. Unfortunately for the Alpiners, they suffered a further setback midway through the fourth quarter when Rose Tynan jumped on a turnover deep in the Alpiners half and her reverse stick shot deflected into the goal past the Alpiners goalkeeper. The Tridents looked to be in a commanding position in the match as they aimed to close out their weekend and finish on 10 points for the competition.

The Mavericks entered their match against the Falcons with confidence after coming from behind in their previous game against the Southern Alpiners. The match started as an arm wrestle with both teams stifling any opportunities that presented.

As the battle wore on the Central Falcons strike line started to put some significant pressure on the Mavericks defence. Unfortunately, they were able to construct any meaningful play that would get them on the scoreboard early on.

The Hauraki Mavericks managed to break the contest open early in the second half when the Falcons failed to clear the penalty corner shot and Alia Jaques managed to pop the ball into the goal.

The tactical battle between the two sides resumed post the opening goal as both teams defences continued to play a pivotal role at shutting down the attacking threats being posed at them.

The Central Falcons set up a grandstand finish when Megan Hull swept a beautiful pass into the circle that Hope Ralph jumped in front of the Mavericks defence and deflected high into the net.

The Mavericks entered the shootout confident knowing that Grace O’Hanlon was between the posts for them. After going through the best of three shootout tied at two goals apiece, it was Liz Thompson who would convert her second shootout to seal the win 3-2.

The Northern Tridents have secured the bonus point with a penalty shootout win in their match against the Central Falcons. After falling behind 2-0 early, the Falcons clawed their way back into the contest as they tied the game up at two goals apiece just before the final whistle.

The battle of the two undefeated teams in the Sentinel Homes Premier Hockey League took place between the Central Falcons and Northern Tridents. Both sides came out of the gates firing and the quality of play would see an improvement in their combinations from the previous night. A scoreless first quarter ensured as neither team was able to create any significant chances early on in the match.

The Tridents put themselves in front early in the second quarter when Steph Dickins put a powerful drag-flick into the corner of the goal. The Tridents would then double their lead in moments later when the Falcons were unable to clear the ball from their circle, and Rose Tynan would then jump on the loose ball and flick it into the roof of the goal.

Entering the final quarter, the Falcons continued to find their footing and started to construct some quality opportunities. With seven minutes to go Michaela Curtis grabbed a rebound off the goalkeeper and slotted home an outstanding shot to tie the game up at two goals apiece.

For the first time in the Sentinel Homes Premier Hockey League, a match would be decided by a best of three penalty shootout. In the end, it was the Northern Tridents who would take the bonus point behind two penalty corner goals to Rose Tynan.

The Hauraki Mavericks have battled back from a sluggish start to overcome the Southern Alpiners 3-2. Trailing 2-0 entering the second half the Mavericks stormed back into the contest through some clinical penalty corner attack.

After tough losses in their opening games, both the Hauraki Mavericks and the Southern Alpiners hit the turf on Saturday playing with great confidence and speed as they looked to put their team in the box seat in the contest. Despite both teams constructing several opportunities in the first quarter, neither side was able to break the deadlock after one quarter.

The Southern Alpiners would put themselves up early in the second quarter when an outstanding square cross into the circle was expertly touched into the goal by Isabella Ambrosius. Moments later Vantage Black Sticks goalscoring machine Olivia Merry jumped on a loose ball in the circle and powered her shot into the goal to increase the Alpiners lead 2-0.

After a lacklustre first half, the Mavericks came out with great focus and determination to start the second half. A well-worked set-piece got the Mavericks on the scoreboard when Julia King put in a well-placed reverse stick shot. The Mavericks continued their comeback when they got themselves another penalty corner, this time the shot took a deflection off the Alpiners first runner.

The Mavericks continued their charge in the second half. They put themselves in the lead for the first time in the competition when Alia Jaques seized her opportunity later in the final quarter roofed her reverse stick shot into the top of the goal.

The Northern Tridents have put together an impressive attacking display in the third quarter to sink the Hauraki Mavericks 5-0 in the first match of the Sentinel Homes Premier Hockey League.

The Mavericks came out of the gates with some great forward intent as they took it to the Tridents early on in the match. Despite several early penalty corners, the Mavericks were unable to break the deadlock early in the match. With only minutes to go in the first quarter, the Tridents would storm through the middle of the pitch as Stacey Michelsen would work herself into some space in the circle as she would then rip a reverse shot into the bottom corner of the goal to put the Northern Tridents in the lead 1-0 after one quarter.

The back-and-forth nature of the match continued into the second quarter as the Mavericks looked to re-establish themselves in the contest and peg back the Northern Tridents midfield which was wreaking havoc. The Mavericks would go close on several occasions but were unable to find the equalizing goal before the halftime break.

The Northern Tridents came out focused and firing in the third quarter and were rewarded with an early penalty corner goal to Kate Ivory. Captain Stacey Michelsen further extended the lead with some silky skills in the circle as she flicked the ball in the net past Black Sticks teammate Grace O’Hanlon. Just before the quarter break Sophie Hildesley slotted the tridents fourth goal in what looked to be an unassailable lead heading into the final quarter.

Rose Tynan would put the icing on the cake in the fourth quarter as she pounced on the rebound off the initial penalty corner strike to score the Mavericks fifth goal of the evening. The Tridents next match is a mouthwatering proposition as they face the incredibly strong Central Falcons. Things don’t let up for the Mavericks as they will now turn their attention to the Southern Alpiners.

The second contest of the evening would see the Southern Alpiners take on the Central Falcons. Both sides were looking to make an impact early in the match as they aimed to play from in front.

The Falcons quickly found their footing and begun to apply some significant pressure on the Alpiners defence. Olivia Shannon would drive along the baseline and put the ball in between the goalkeeper and the post for the opening goal. Moments later Hope Ralph would extend the lead with an easy touch in on the far post. The speed of the Falcons early on was proving difficult for the Alpiners to contain. Megan Hull would further cement the lead late in the fourth quarter with a booming sweep that put the Falcons up 3-0 after one quarter.

The Alpiners started to climb into the match in the second quarter as they controlled possession for longer periods and started to construct some opportunities of their own. Alpiners Captain Olivia Merry would pounce on a loose ball in the circle as she put the ball in the back of the Falcons net to make the score 3-1. Only moments later the Falcons would reestablish their three-goal buffer with an outstanding Olivia Shannon run where she put the ball to an open Hope Ralph who scored her second goal of the match.

Following the fireworks of the first half which would see five goals scored. The second half would see the match tighten up and the two sides unable to trouble the scorers again. The Falcons will be looking full of confidence as they head into their pivotal match against the Northern Tridents. The Alpiners will be able to take several positives from the match after they battled their way back into the contest after the early setbacks.