We’re excited to begin the Junior Winter Hockey season this weekend and introduce some exciting new trial changes for Kiwi Sticks and Kwik Sticks Grades. Check out the rules below and some videos showing how these changes will affect your grades in place of Penalty Corners (PC’s). We can’t wait to see you out on the turf!!

We no longer have Penalty Corners for these grades. We have introduced a 1 v 1 Shootout.

– Defending team has 1 player behind the goal line, a Goalie if one is playing or a field player.

– Attacking team has 1 player who begins 2m outside the circle.

– Both teams remaining players stand in the other circle.

– On the whistle both players move, no time limit. The other players can re-join the game once the whistle has been blown for the shootout to begin.

– If the defending player is a field player then the ball can only be pushed at goal by the attacker, no hitting allowed unless there is a Goalie.

– Shoot out is like the start of play and only ends with a goal scored or the ball goes over the backline or a free hit is awarded.

– Players defending and attacking Shoot Outs should be rotated so different players get the opportunity to have a go.

– Defending team has 1 player behind the goal line, a Goalie if one is playing or a field player.

– Both teams remaining players to stand at the half way line. (Or for 6 aside games the opposite circle)

– Once the PC commences the players at half way can re-join the game.

– If the defending player is a field player then the ball can only be pushed at the goal by the attacker, no hitting is allowed unless there is a Goalie.

– Players defending (if field player and not Goalie) and attacking should be rotated so different players get the opportunity to have a go.

Some Kwik Sticks grades will be playing 4-5 weeks of 6 aside games. Your team has been allocated a normal full field one hour time slot. Please split your team in half and you will play one half of your opposition for 25 minutes, have a 5-minute half time then swap and play the other half of the team for 25 minutes.

Scoring will be as follows:

If you win your game you get 2 points, if you draw you get 1 point and if you lose you get 0 points. Your result for the entire match will be your 4 game scores added up. This means the maximum score would be 8-0. e.g:

The Full-time score would be Western 5 points Roskill Eden 3 points. The score should always add up to 8. 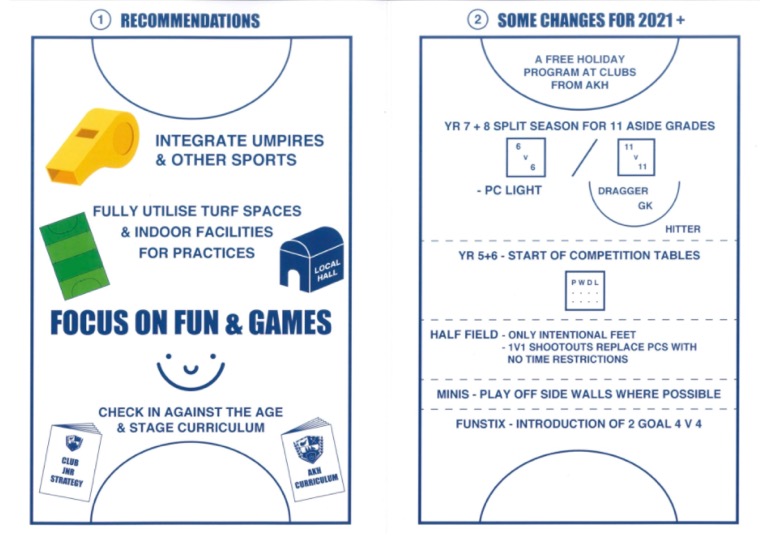